A Look at Iconic Skate Graphics

Almost as soon as skateboarding moved from the barefoot paths of the west coast into skate parks, benches, and abandoned pools, it’s had a close connection with another world of rebellion and creativity — the art world.

How the connection between art and skateboarding first happened isn’t clear, but it’s a match made in heaven (or hell). The number of skater bios that read “skateboarder & artist” are too many to count, and the contributions of big-name skateboarders to the world of art are huge.

With that in mind, we decided to show off some of the most iconic, influential graphics in the history of skateboarding — from the bottom of the board to the walls of galleries and everywhere in-between.

In the skateboarding heyday of the 1980s, legend Steve Caballero got really into dragons. We don’t know why or how, but it captured the hard rock spirit of skating and music in the 80s. The result was a series of dragon graphics that were loved and copied by skaters and artists around the world.

Also in the 80s, Christian Hosoi honored his Japanese heritage with a simple, red and white graphic of the rising sun. It was a departure from the over-the-top, color-blasted graphics that were popular at the time, and it led to a range of imitators and tributes—including from Chad Muska, who used the graphic on one of the boards he helped design for Shorty’s.

When Zoo York pioneers Eli Gesner, Adam Schatz, and Rodney Smith first started out, they didn’t have much money for complicated skateboard designs — or, you know, any money at all. So they stuck to the basics, tagging boards with the simple words ‘ZOO YORK.’ They didn’t know, or maybe they did, that this would become one of the most iconic graphics in the history of skateboarding — helping give New York skating an identity of its own away from the spotlight of Los Angeles. 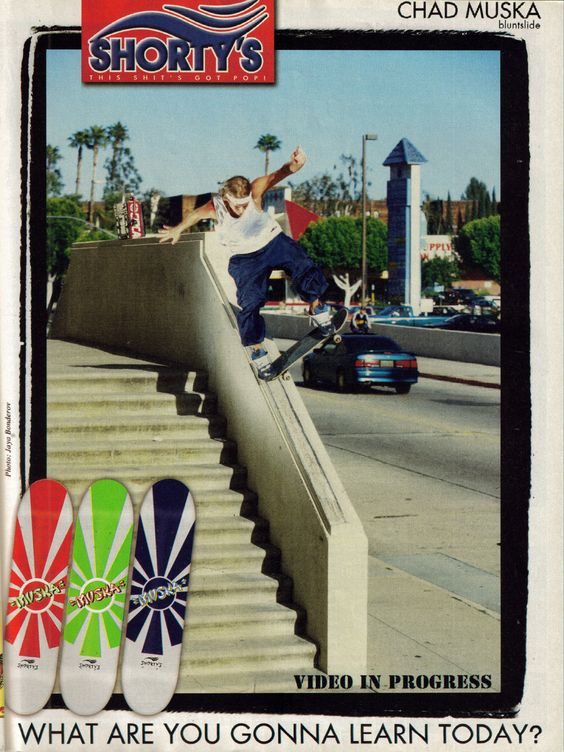 Chad Muska spent time in the 90s as the biggest name in the entire sport. At the time, his style was its own art form — big, baggy pants and tons of hats were his trademark. That weirdo style extended to his board graphics, which featured silhouettes of him combined with the single-name he was known for—Muska.

No list of iconic skateboarding graphics would be complete without the image of a human/hawk hybrid’s shrieking skull. Tony Hawk’s famous icon may not be as revolutionary or wild as some others in the history of skateboarding, but you can’t deny how iconic it is. No matter what you think about the skater himself, everyone recognizes the Hawk.